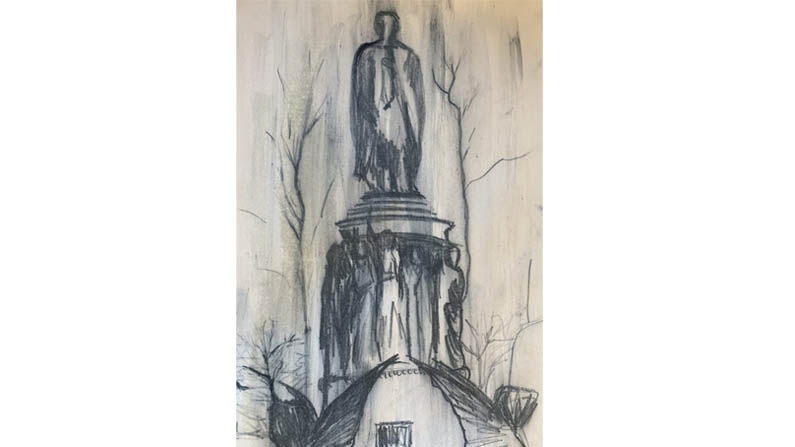 During the editing of my latest novel, If Looks Could Kill, I was going through the manuscript trying to develop elements of the plot or passages that might deepen the experience for the reader. I stopped at a scene near the beginning where two characters are fighting in front of the Daniel O’Connell monument on O’Connell Street. Sometimes setting choices are very deliberate, you know exactly where a scene should take place and why. I liked that these two men were scrapping in front of Daniel O’Connell, a man who abhorred violence and bloodshed, but I wanted to make sure I wasn’t missing an opportunity for it to take place in another part of the city. In the end, I decided it was the perfect spot especially when I came across something that might have been more reflective of where these characters, Mark and Gar, found themselves.

Daniel O’Connell, known as The Liberator, was one of the most important figures in Irish history. He fought doggedly for Catholic emancipation, the freedom from discrimination and civil disabilities enforced by the British Government on Irish Catholics. “I will go on quietly and slowly but I will go on firmly and with a certainty of success.”

Among those oppressive restrictions imposed on Catholics were the rights to vote, sit in parliament, rights to certain levels of education, the free practice of their religion and the purchasing and the inheritance of land. O’Connell was also a steady and vocal supporter of the anti-slavery movement in Britain and the US.

But there’s one piece of his past that seems at odds with his character. He fought a duel on 2nd of February 1815. Duelling, at that time, was still practiced in Ireland. Once a challenge was issued, you participated or risked losing your honour and reputation. O’Connell, in a speech to the Catholic Board in January 1815, called the Dublin Corporation “beggarly” and the members of the Corporation, who viewed O’Connell as “worse than a public nuisance”, didn’t take too kindly to that. The name-calling—beggarly—possibly struck a cord as a few of the members were at that time in financial difficulty and one John Norcott D’Esterre was close to bankruptcy. But O’Connell was known for worse name-calling than “beggarly” so it’s likely that the Corporation seen the episode, which had gathered some attention in the press, as an opportunity to take O’Connell down either physically or, if he refused to duel, by ruining his reputation. D’Esterre first wrote to O’Connell demanding an apology but O’Connell refused. There followed a number of exchanges over the next couple of days culminating in D’Esterre taking to the streets of Dublin swinging a horse-hair whip and attempting to provoke O’Connell into making a challenge. When no challenge came, he issued one himself.

The pair met in County Kildare at Bishop’s Court at four on a cold February afternoon. Pistols were the weapons of choice. Spectators had gathered on the slopes some distance away; the field only thirteen miles or so from Dublin had called quite the crowd. Many were supporters of O’Connell, so much so that D’Esterre’s second, Stanley, feared there would be further bloodshed should the duel result in O’Connell’s demise. D’Esterre was a former Royal Marine and an experienced duellist, said to be able to snuff out a candle from ten paces so there was a credible concern that O’Connell wouldn’t be leaving the field alive.

When the handkerchief fell, D’Esterre took a step to the side to confuse his rival. O’Connell raised his pistol, aimed low and fired. D’Esterre fired at the same moment, his shot hitting the ground at O’Connell’s feet. But O’Connell had hit D’Esterre in the hip and the alderman went down. The spectators roared: “O’Connell forever!” D’Esterre was badly injured but no one suspected the wound could be fatal. And after the duel, O’Connell’s second, McNamara, and Stanley congratulated each other that the job had been done with no loss of life. However, the bullet had lodged in D’Esterre’s stomach and in two days he bled out and died. In the hours after the duel, such was the belief that O’Connell couldn’t have survived, that word had already begun to spread through the city of his death and a party of officers were sent out to protect D’Esterre from O’Connell’s supporters.

The duel was deeply regretted by O’Connell and more so because of D’Esterre’s financial situation at the time of his death. The day after D’Esterre died, bailiffs seized all his possessions, leaving his wife and two children with next to nothing. O’Connell offered half his income for the rest of his days to D’Esterre’s wife who refused. Eventually she accepted financial support for one of her daughters which O’Connell continued to pay for the last thirty years of his life.

O’Connell remained filled with remorse about the duel and every time he passed D’Esterre’s residence on Bachelor’s Walk he sent up a prayer. When at church, he took to wearing a black glove over the hand that had fired the fatal shot. “That hand once took a fellow creature’s life and I shall never bare it in the presence of my Redeemer.”

So not quite a comparable dispute to what takes place between one-time friends Mark and Gar near the beginning of If Looks Could Kill. But I think readers who are familiar with this part of O’Connell’s history might have their memory prodded and imagine that should the bronze features of O’Connell’s likeness move they would perhaps frown in consternation. Or maybe his expression would display empathy at the men’s struggle because somehow time, place and circumstance had conspired to put them in front of each other as enemies.

If you’d like to pre-order IF LOOKS COULD KILL you can do so by clicking HERE. Alternatively, you can order through your local bookshop.