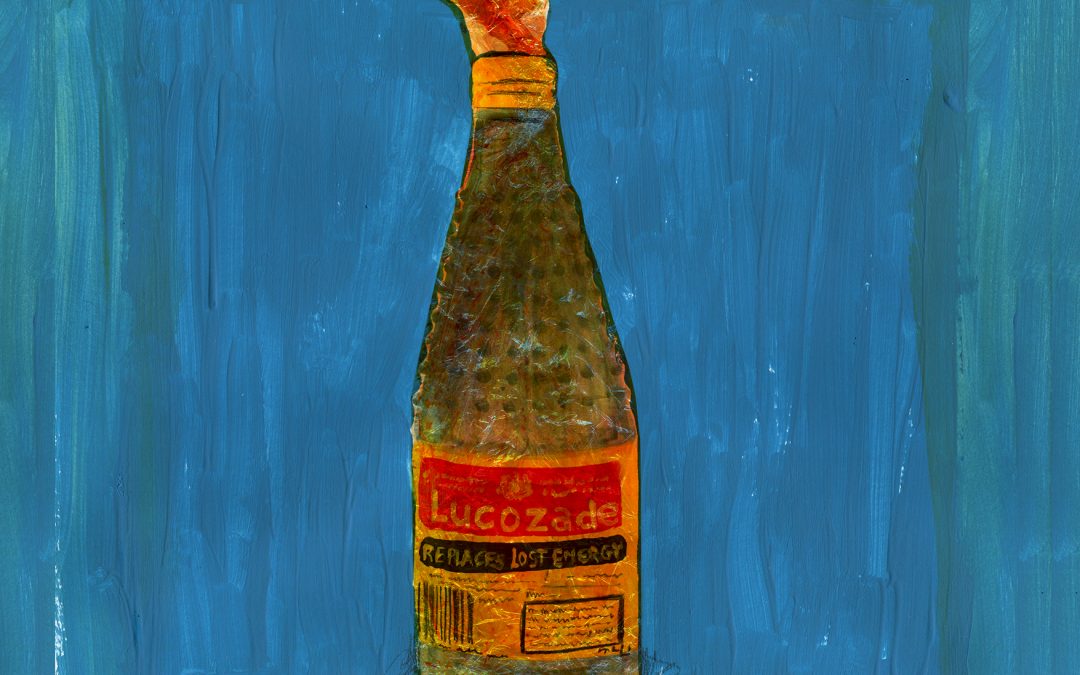 At the beginning of the pandemic after hearing that shops were out of paracetamol, I decided it was best to stock up on a few bottles of Lucozade should we find ourselves having to see out a fever. It wasn’t until I was putting the bottles away that I realised there was possibly another reason I’d thought to buy Lucozade. So entwined is Lucozade to any childhood memory I have of illness that clearly my need to reach for this particular drink is something of a Pavlovian response.

‘Do you remember the crackly paper?’ my sister said to me when I brought it up, her voice high with the rush of nostalgia. And then we both let out a ‘those were the days’ sigh, when Opal Fruits were Opal Fruits and a Marathon was a Marathon.

The crackly paper she referred to was a yellow cellophane that wrapped the bottle, the excess gathered above the lid like the skirt on a bouquet of flowers. Just enough dressing to give it a showy look. This was a soft drink of status. To any not familiar with its legacy as healer of all ills, such was its assumed recuperative powers that, were you to bring it along to someone’s house, it was as good a gift to the host as a bottle of wine or a box of chocolates.

I remember once going to a school friend’s house and they had a bottle on their side board. Just sitting there. As if it was normal to have one lying about.

‘Is someone sick?’ I asked, already imagining how it would be to open it and gulp down the crisp, fizzing, sweet liquid.

‘No,’ she said, herself eyeing the bottle, ‘It’s for whenever,’ she added with a shrug and I could hear something in her voice that made my skin prickle with jealousy.

It was rare enough to have soft drinks just sitting there in the regular Irish household. Perhaps in the run-up to Christmas when there was a strict no-touch rule until Christmas day where then you had twenty-four hours to down as much liquid sugar as you could stand. But an untouched bottle of Lucozade without a sick person in the house would be like discovering a tray of mince pies laid out on a picnic blanket in the middle of July.

Even if you were ill, you weren’t guaranteed a bottle of Lucozade. You had to graduate to it. You had to be ill enough. For example, when I was seven, I misjudged the bend at the bottom of our drive and cycled full speed into a brick wall. What stopped me was my head. It was enough of a knock to leave me lying on the couch for an entire day. The bump on my forehead wouldn’t have looked out of place in a sci-fi movie and the resultant wound kept my kid fingers scab-happy for weeks. But a swift examination showed that I could keep my eyes open and therefore the diagnosis was that I was grand. I didn’t get Lucozade that day. If you were ill, you might start out with a prescription of dry toast or 7up say. Maybe a bag of grapes. But Lucozade was for serious cases. As a treatment, it was right up there with a house-call from the doctor.

The bottles were glass and had this bubble effect all up the neck. Once unwrapped, I would run my fingers over the small cool glass blisters with something akin to reverence. And when someone was ill enough for a bottle of it, I would check in every so often, not to see how the patient was, but to see how the drink was faring. It was a source of acute pain to witness the half-drunk glass that would inevitably be left on the side, its fizz dying slowly to a flat bright orange syrup.

This was the conundrum, you only got a bottle of it when you least likely had the desire to drink it. But thankfully, in our house, the bottles weren’t to be disposed of when empty. When that time came, we would circle, waiting to discover who would be chosen to give the bottle its second life. This time as hot water bottles. The fact that we would fill it with boiling water didn’t seem much of a worry, the type of coldness that existed in our beds and bedrooms was enough to ward off any concern around scalding or glass shattering. Central heating was not the most efficient in many houses in rural Ireland in the eighties. Nor were high tog duvets a common find. It was a source of some bewilderment that you couldn’t move with the weight of scratchy woollen blankets over your body yet still be, just about, staving off frost-bite. So a hot water bottle was a must. I had thought this recycling of the Lucozade bottle was a common thing in households. It wasn’t until I asked a few friends of mine whether they remembered the old soft-drink bottle as bed warmer that I realised how others had sadly missed out.

‘As a hot water bottle? No,’ they all said, with not an insignificant squeak of, ‘Are you mad?’

They had possessed actual hot water bottles as actual bed warmers. The rubber ones that we still use today.

There’s a feeling of unity to the stories we have about growing up in eighties Ireland. Battles of the emersion switch, the absolute misery of getting dressed in the morning, feeding your vests and uniform beneath the lagging jacket of the cylinder before you dared dress for school. The ever-present open window, no matter the season, in some room of the house to ‘let the air in’. But now, I felt like I’d gotten the rules of our nostalgia club wrong.

‘But they were glass,’ one said.

I changed the subject. ‘Do you remember playing football in the middle of the roads?’

‘Oh my God! Can you imagine doing that today?’ And we were united once more in the shared glow of nostalgia.

I wanted to tell them about the little slip of plastic, torn from a shopping bag, that you’d have to place beneath the metal cap of your Lucozade hot water bottle to act as a seal, as it had a tendency to swell with the heat then leak. I’m sure the manufacturers had no idea this was the end game for their product but it was possibly the real reason I got excited if I was sick enough to get a bottle of Lucozade. Because looking forward, beyond the illness, I could already feel my feet slipping down beneath the freezing bed sheets and finding that brand new hot water bottle and tracing the tiny glass bubbles with my toes.

Olivia Kiernan is author of the DCS Frankie Sheehan series. Her latest novel, IF LOOKS COULD KILL, lands in July and you can pre-order through all good bookshops or here: If Looks Could Kill.

Illustrated by Ann Kiernan. Check out her amazing work HERE.